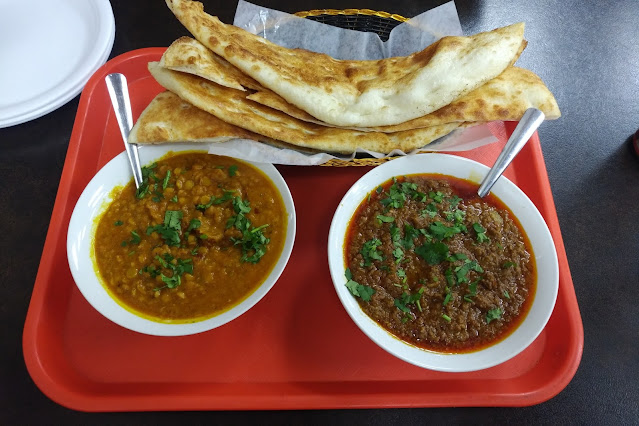 I, now, have visited Lazy Ass three times in his new place and every time we go out to eat. That's mainly because he has a long list of good places that we can enjoy food, mostly East Indian. This time he suggested to try Vietnamese but I'm off Noddles and that kind of shit but the place we went to had no less carbohydrate than the place we were supposed to go, firstly!
We went to this bistro/cafe in downtown called Uptown Pizza where they serve East Indian food and drink alongside Pizza! I left it to him to order our food as he's the expert. We got a Rice dish, which contained colourful Rice and meat, possibly Lam(!) and a tray of two bowls, one contained Ground Meat and Potato with a sprinkle of Parsley and the other one Split Peas with a plate of Bread. The food was hot, spicy and delicious but it had so much fat, carbohydrate and oil than I didn't have anything but water and coffee the next day until 05:00 PM! Lazy Ass had even a bottle of Mango Drink which was from there for $2.99 but I guess they had bought it for $0.30 probably! It was bottled in Pakistan, I later read.
The funny thing is on the way home, Lazy Ass stopped at a Burger King and got himself two Cheeseburgers, a large Soda and a Hershey Pie! I first thought he was joking when he said he was going there but it was no joke! I got a pie as well for tomorrow but if this guy gets any sort of serious illness in about 5 years or so, I won't be surprised!
(Photo, top: The dynamite tray, I would like to call it. It has so much fat, cholesterol and carbohydrate that could stop some people's heart!)
Food Friends