The 19th is Finished 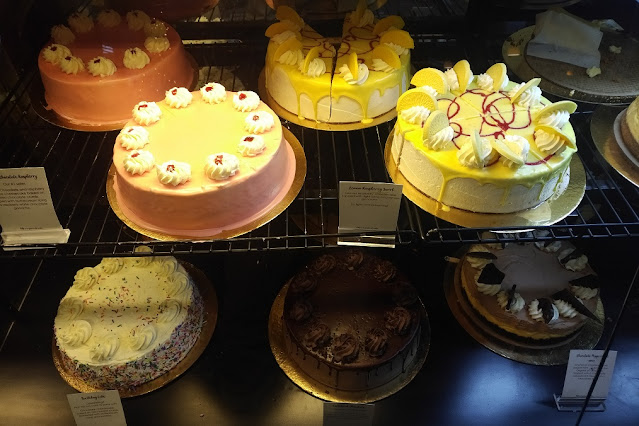 It was the 19th anniversary of my immigration to Canada and I had wanted to do something fun but ended up meeting The Mumbling Guy but that was basically because I has asked me to join me for a coffee so I can get a few advises for my upcoming interview. The guy accepted and we met in The Cheesecake Café.  I ordered a cup of Coffee and a slice of Callebaut Chocolate Cake for me and an Espresso and a slice of White Chocolate-Raspberry Cake for him. This was my second time in this café. I came there year ago once with The Lady but it was too long ago to remind me of any memories(!) besides I was focused on the topic which was the interview.
This is what I like about The Mumbling Guy: Despite being cheap and looking for possible benefits in you, if he can help, he, most of the time, would. I had not told him that I would take him to a luxury café. We were supposed to meet in a freaking McDonald's but I wanted to spend a little quality time in a nice and clean place and The Cheesecake Café is definitely is the place. I don't mind paying $27.83 (excluding the tip)  for two cups of Coffee and two slices of cake once in a while. By the way when the food arrived and he tried the Espresso he found it too strong. So I gave him once of my creams but apparently that one was not enough either. So the waitress brought him a cup of Coffee and a little Milk. The funny thing is the guy says that he had been to Italy and while touring the most famous cities for 17 days, he had tried Espresso every day but couldn't handle one here!
Anyway our meeting was about to end when he told me that he had lost nearly $100,000 over a business deal that he has involved since early summer this year. He sounded really sad when he was telling me the story and I could sense that although he was wearing a mask! He said that he had lost a few pounds and 2 sizes or pants or something! I can understand how devastating that could be but at the same time it was not easy to believe because he's the one who always claims he is the best and knows all. He did he get robbed big by a guy of his own country or origin then?!
(Photo: A number of the cake on display in The Cheesecake Café. I will certainly go back soon to enjoy more cake and perhaps some food)
Career Financial Food Friends