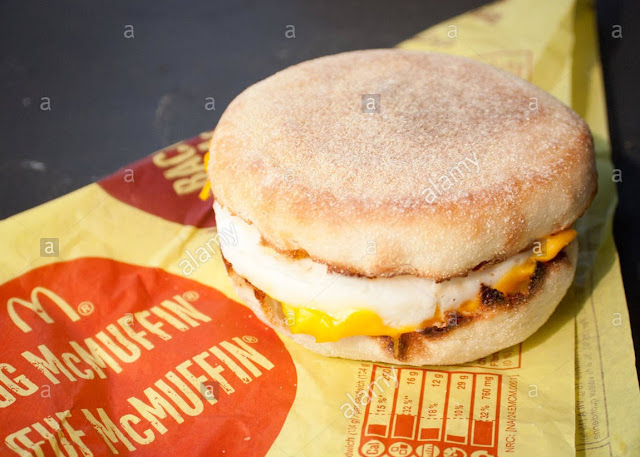 There were these fella brothers that I had breakfast with almost everyday until last Mon. Not that we went for a breakfast together. I would arrive at work at usually the same time that they would go for their breakfast break. We chatted, shared a laugh or exchanged food and at sitting next to each other. They always offered me food and I always accepted. Anything from Boiled Egg to McDonald's breakfast sandwich and that was I got last Mon. from one of the fellas whom I would call him One-Man here. I usually don't eat McDonald's breakfast sandwich and that's not because of its sausage. It's because of the White Bread. When they served their Whole Wheat Bagel I used to get that from time to time. Now that they have discontinued, I don't eat much of their breakfast sandwiches, let alone the other sandwiches they offer.
Anyways I got the breakfast sandwich from One-Man. It was a Egg & Cheese and that was the last day he came to work! I saw him in the afternoon and he asked me how many Tylenol did I think he could take! I told him that it'd depend on the strength and physicians don't recommend more than 2 within 8 hours. I asked him what had happened and he said that his whole body was aching. Today in a meeting at work it was announced that his Corona test result has come back as positive(!) and I sat next to this guy almost every day for more than 2 weeks! His brother, who brought that delicious food a few months ago is also considered sick as the result of his test was the same.
The manager then asked me to join her in the office and said that I should isolate myself for 14 days because I told him that I had been given a breakfast sandwich and I ate it! I asked her if the virus could be transferred through food and she said yes. I said that it had been a week and I was fine. She asked me if he had made the sandwich or was it store-bought. I explained that it was store-bought and wrapped. She said that I didn't have to be worry then! I knew that already but the fact that I had to isolate freaked me out for a moment and then the fact that the wrap probably saved me from that, was amazing.
One thing that I should mention here is that an aching body is a cold symptom. I think One-Man only has a cold and this proves that Corona and cold symptoms are similar. So many of these people who are classified under infected ones these days might simply have a cold or at the most influenza.
(Photo: McDonald's Egg & Cheese breakfast sandwich and its wrap. It's amazing that you can find almost any photo you want on the web!)
Colleagues Food