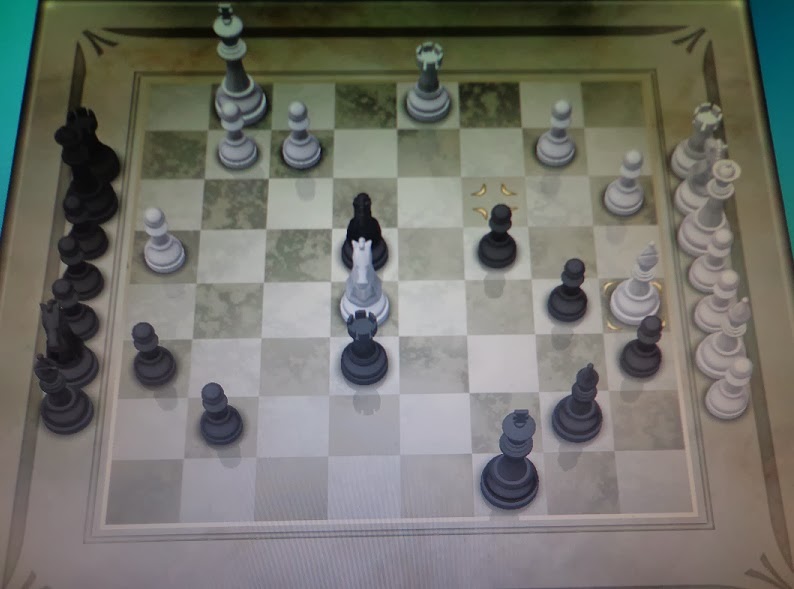 I wasted lots of time on Chess a short while ago. I don't believe that it's bad game. I'm just saying that it could be a problem such is gambling and I got that in summer of 2011. That time I could have spent on something much more useful.
Nowadays I play rarely and not online anymore. At times just against the computer and losing most of the time because I simply just don't want to think it over. I sometimes ask myself why I'm doing this!?
This one which I played a short while back at level 5, the highest level I've ever played against the computer, shows the moment that my opponent, in white has moved it bishop to the side of the board. This looks like a juicy opportunity to get his knight at the center of the field, which is it's seen is unarmed and unsupported. This however is a bait for a big deadly trap! If I kill the damn knight, its next move would be simply running its rock all the way from the other side of the board and have it sit just next to my king. With the bishop already covering that point there will be no movement and it will be checkmate! I thought it over and didn't take the bait but I don't remember whether I lost or won!
(Photo: Taken from the monitor, this picture shows the trick of the computer. I possible counterattack probably would be moving the king to the right and future fights or driving the rook to the end. The second one sounds wiser)