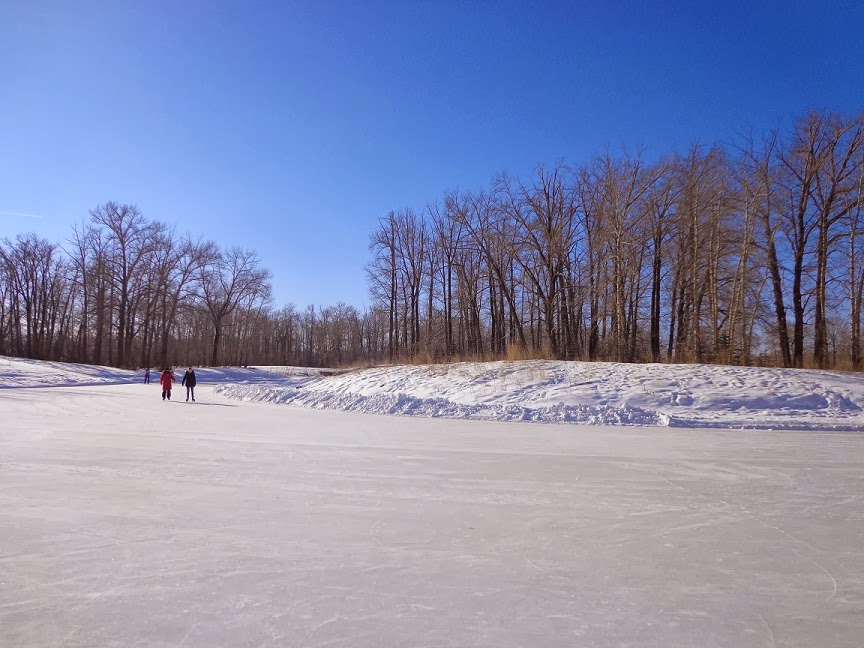 It was an extremely cold day today but we wanted to get out and do some skating and I suggested a new place: Carburn Park. The Lady was not quite on the same page but accepted. We found it after the second try but happily it didn't waste so much time. It's close to Bow River and it's a curved lagoon with lots of room for tens of people. It was around -22º C and but wind was not blowing to harshly. The low temperature had kept many people away and there were only 4 other people on the ice. I quickly geared up and got on it. The ice was no too bad. Of course there scratches ad grooves but what do you expect. The Lady geared up as well but just after a few minutes she said that she didn't like the ice and added that she wanted to leave. I know she was cold. I was too but not as much as the night that I basically ran away from the ice! I had suggested in the morning to buy a Monkey Hat but she refused.
So I skated a bit and circled around. I didn't even had my gloves on me but I stayed. Overall it's a nice play and very roomy for skating and I'm sure it was easy because of the cold. I bet if it's just a few degrees below the place gets packed with the skaters in that neighbourhood. It's a bit far from our place but worth trying off and on.
(Photo: Carburn Park skating rink gives plenty of space. In a beautiful but extremely cold of Feb. there were only a handful of people on the ice)
Exercise Weather