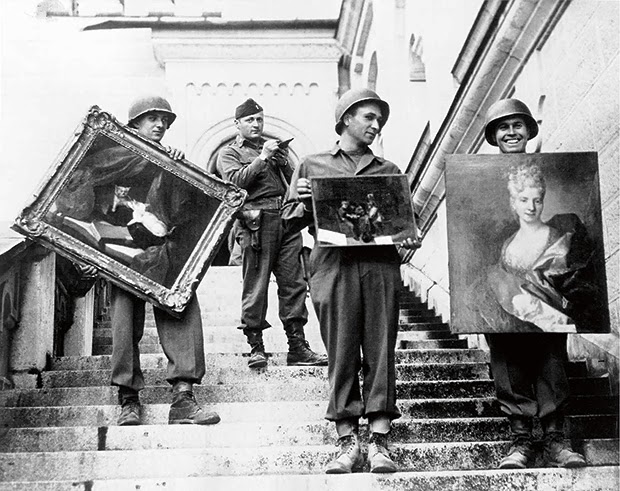 I promised myself not to judge a movie by watching it only once. It had happened many times that a movie has not made me very amused but when I watched it for the second or third time, I enjoyed it. That was why I made this decision.
This time I didn't even need to finish the movie! I was so pissed off after the first one hour that if The Lady had not been besides me, I would have left the movie house! This movie, The Stupidest Monuments Men is so messed and boring that I don't even know how to start! The movie seemed to me like a few separate clips of different events which the editor has tried to arrange them in such an order that they make sense but the chain has been disrupted! The dialogues were so boring, nonsense and stupid! I guess the intention was to make it a bit funny but whether they succeeded or not? I don't think so! The movie has good actors such as Demon, Goodman, Murray and Clooney but they all look dumb and boring! Surprisingly the director is Clooney and that's probably why the movie is so fucked up!
One extremely dumb scene is where Murray is taking a shower in the officers' tent and a Christmas song is playing on megaphone. That was the moment the disturbing and annoying sound of that silly girl made me almost run out of the theater! Murray was seen sitting on a bench with teary eyes, looking at nowhere! What the fuck the fucking silly director wanted to show here? I don't know! Is the movie about the artifacts that the Nazis were trying to hide or the soldiers who were missing their families and feeling home-sick!? Such a fucking silly scene. I don't know what the fuck the stupid screenwriter was thinking!
The rest of the movie was these guys going here and there and finding stuff. Another silly scene was when one of them, a British guy finds a statute of Virgin Marry, or as it's said in the movie, Madonna and tries to save it from a bunch of Nazis who were about to seize that as well as a few other stuff. The guy is hiding behind a wall when the soldiers come in and that's when he cock's his pistol. The German officer hears that, takes his gun out of the holster and approaches the wall slowly. The British guy suddenly shoots and in return the Nazi officer does the same but he shoots multiple times. The scene ends with the German officer holding his left arm which is wounded and the British dying!
The movie was the first one since 2006 that I could not watch and wanted to storm out! I and Ali G. went to watch a stupid movie called Zodiac in Chinook and just 20 minutes to the end I felt that I could not take it anymore. I came out and waited for him. I had the same feeling after only 45 minutes or less but as I said only sat there out of the respect I have for The Lady and she calmly was sitting and watching! At the end I would like to give the movie a rating of 1 out of 5. I had read Rotten Tomatoes' rating which is only 43% but I said I had to see it myself and that was a mistake! If I had trusted Rotten Tomatoes, I would have saved ourselves two tickets, as well as two hours and a few liters of gasoline! Watching this movie is not recommended at all.
(Photo: Allies soldiers with the artifacts found from Nazis hideouts. There is no doubt that what these soldiers did was a great work but the way it was turned to a movie, I have to say, is a complete failure and true disaster in the history of cinema!)
History Movies