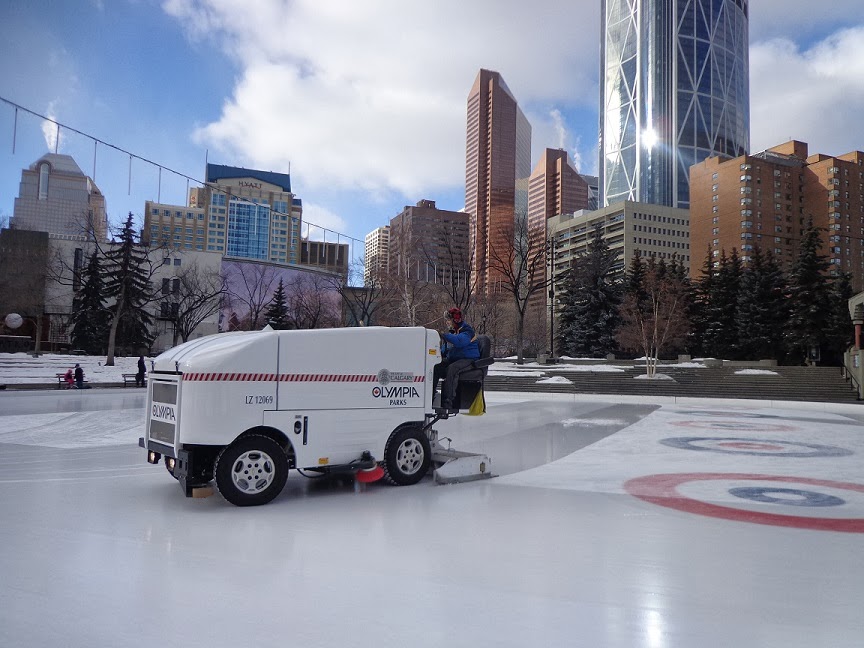 It's very good that The Lady is accompanying me in practices this year so I could have practices and exercises as many as possible, this year. We wanted to try the other outdoor rinks but she insisted to go to Olympic Plaza this afternoon as she was hoping it wouldn't be crowed and ice had been maintained.
We got there shortly before 14:00 hours and surprisingly the ice seemed maintained. There are a few people there but not as many as made it impossible to practice. So we hit the ice. But shortly after that and while we were warming up we learnt that a little Zamboni was coming out of its nest. It went back and forth for about 15 minutes and then we jumped back on ice. Having not very cold weather and pleasant sunshine with not much wind attracted a good crowed but happily and first off they were mostly beginners so there was not disturbance or crazy skating second off you can not skate more than 1 hour. You simply get exhausted especially if you fall a few times! So the crowd does not stay on the ice for a long time. We stayed up to an hour and then we realized we have had enough. What I realized that the had grooves just shortly, let's say 40 minutes after it had been maintained. I don't know anything about ice management but I realized U of C's doesn't get that much scratched after too many people skate every day. I don't know it's how they maintain the temperature on the surface or what but I've heard that Olympic Oval has one of the best ices and fastest ones in the world. After all we go here and there just for being active and having fun. Speed in not a problem for us but maintaining good ice by the City is.
(Photo: City of Calgary little Zamboni is maintaining the ice in Olympic Plaza)
Exercise