Fury: The Most Stupid War Movie Have Ever Seen 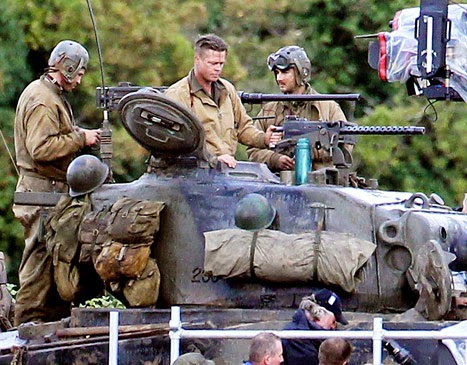 One thing for sure I did when I returned from my trip was to check what's on the big screen. I realized a few movies and added them to my schedule to watch them all. Fury was one of them which I caught today but DO NOT WASTE YOUR TIME AND MONEY ON FURY. IT IS A TOTAL DISAPPOINTMENT!
This is supposed to be the story of an American tank commander who leads his crew through the WWII and promises them to keep them alive. The story has a very slow beginning and is nothing but a few soldier talk full of profanity and that is it. Then there is a battle scene almost after 45 min. which reminds the audience he or she is watching a war movie.
At this point the Americans reach a small town and capture it with not much difficulty and then settle down for a rest. I forgot to mention that before this scene, the Sergeant, the commander tries to man one of his new crew up, the one who's a young fella and has no war experience and for that he forces him to shoot a captured German soldier, a POW, from behind! So I really don't know what this idiot writer of the movie is trying to say but at the same time I know Americans killed many surrounded Germans. One of the obvious ones happened in Dachau Concentration Camp.
Anyways these guys are shown at the captured town and the Sergeant notices a woman looking out of a window. He goes up to the house with his new guy and discovers two women. He then orders the young guy to go to the bedroom with the younger and more beautiful girl while asks the other woman to bring her hot water so he can shave. Meanwhile the entire crew of his come and they all sit at the dinner table. The woman serves them all fried egg and they say a few nonsense word, make fun of the young guy and then leave the house. Absolutely nonsense! Pitt's performance during the entire movie and particularly when there are exciting moments, is almost average.
As I said the guys come out of the house and this is shortly before shrapnel land in that area killing the young girl!! The American soldier who had sex a few minutes ago tries to help her out but one of the crew, the very same one who were making fun of her and were also annoying the girl, avoided him!! I don't really know what this fucking stupid write had in his mind by extending the movie with these meaningless scenes!
Then there's the best scene of the movie and that's when the column of four American tanks are attacked by Germans. A German tank successfully destroys all the tanks except for Fury, the Sergeant's tank and eventually is hunted by them. I have to say this is a only good scene in the movie which still has more fiction to reality into it!
This good scene is completely ruined, as well the movie, when the tank hits a mine and cannot move. The young fella realizes a German battalion is marching toward them. So runs and tells the Sergeant. He orders his crew to run but they stay with him and set an ambush for the Germans. That ambush leads to killing of the majority of the Germans(!!) and at the end all of the crew get killed except for the new young gut who gets out of a hatch and lies on the ground underneath the tank! I could not stop looking at my watch every 15 minutes and was bored out of my mind and offended by this much stupidity and lie! A German SS finds the guy under the tank when he lightens there with his flashlight but does nothing to the guy who is showing his palms as a sign of surrender!!!!
The next day the same guys shown at the beginning of the movie find the fella and rescue him!!! Thank the Lord that the movie is ended! I am a big fan of war movies and there's barely any war movie that I haven't seen and don't have its DVD but this one is a total waste and nonsense. I would give only 1 out of 5 stars and strongly discourage to watch it.
(Photo: Film crew and actors at the set of Fury)
Movies