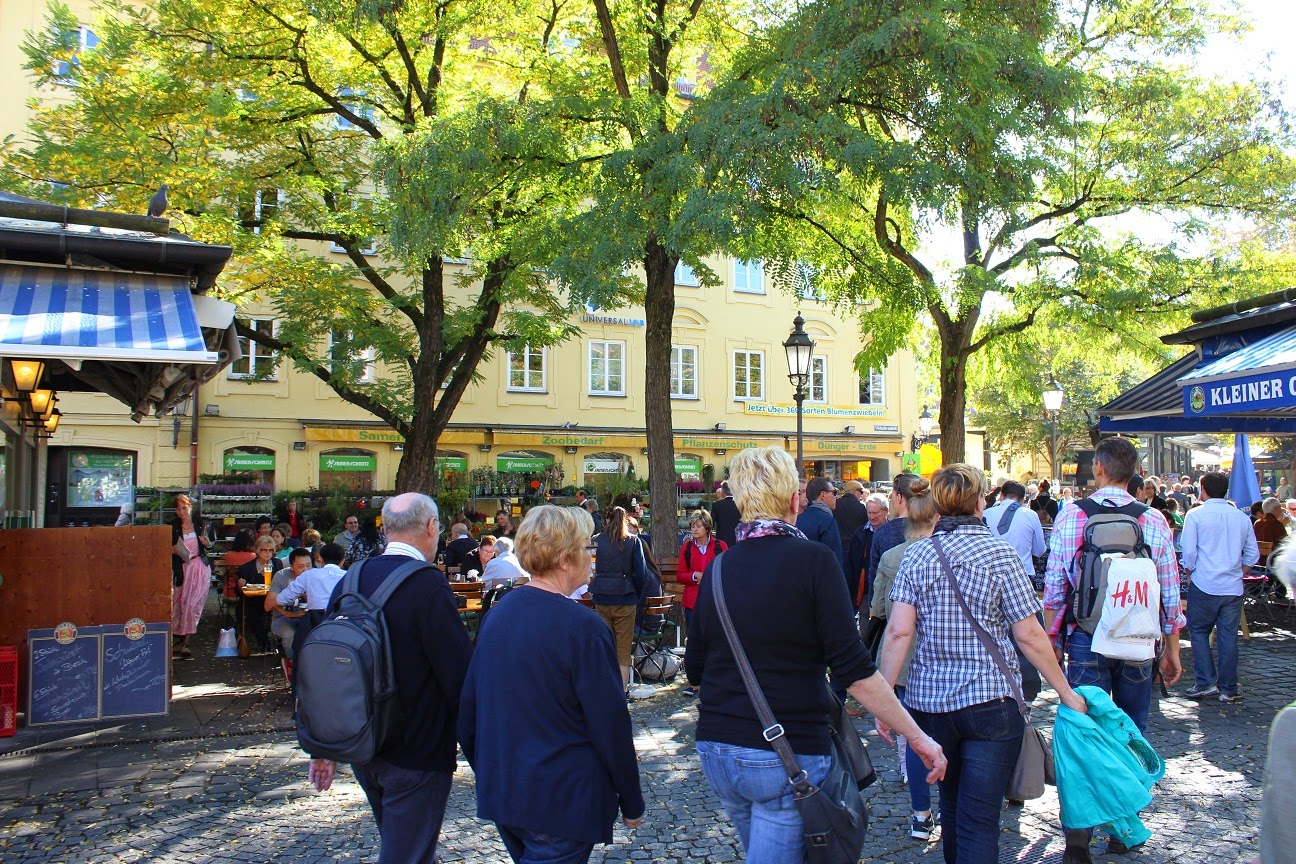 I got myself incredibly tired in the past few days in a way that I realized that I could no longer walk easily after 15:30, almost. So I headed back to the hotel after a short tour of City Center. When you compare the Downtown or City Center of cities such as Calgary, Vancouver and Toronto, where I've been to all, you see differences, big ones and similarities. The similarities are the luxury and poverty, two great contradiction you see everywhere, although Canada's are more visible and bigger (Vancouver Downtown East-side, Calgary's, etc) but the big difference is the richness of City Center in Munich in terms of history, and luxury and of course public transportation is incomparable which I will assign a separate post to it, most likely, later.
Today's destination originally was this ancient market of the town which is held outdoors and called Viktualienmarket. Many words are combined together and create a long work. So here this word is created by the combination of two words of Viktualien and Market which consecutively are a name and of course the word market.
The market is unbelievable compare to the other farmers markets I've been to. The variety is great and of course most of the items expensive. It's the ultimate place for the food lovers but you need to have big cash. For me, who used to be a big eater and still enjoys a good meal or tasty snack and a healthy drink, Viktualienmarket could be a dangerous place! I walked around and while enjoyed the scenery and took photos, tried different foods. While I didn't eat much, the following is a price list of the items I tried, as far as my memory allows to remember things:

1- Large freshly squeezed Orange Juice: €4.80 It was really good and I was ready to have two more but I realized my situation! The glasses could be a health hazard because it's hard to believe that they sanitize the glasses. Carrot Juice here is the worst because the old woman pushes the pieces down the throat of the machine with the same hand she gets money from the customers!

2- One hundred g. of flavoured Olive: €1.75. I tried two different kinds. One with tomato and paprika which was great and the other one with mild garlic and a kind of vegetable. This stand is great and I'll visit it again once before I leave Munich unless I find a place which offers the same product but the guy, a tall young beard fella, I'm quite sure rips everyone with his scale, especially if he doesn't speak German, or is a foreigner. It's hard to believe that what he gave me was 100 g. but I didn't want to argue over a few cents.

3- I also checked another shop which as soon as I stepped in a mid-aged lady introduced their products in a sort of understandable English. At times she had to pause to find the right word and I would help her. They had different types of pastes such as Pesto and different types of breads and cakes. Their claim is their, for example Garlic Paste is made out of wild garlic and their Apple Cake is made without sugar. I tried a sample of that cake and it was unbelievable but very expensive, if I remember it correctly a little bit more than €4 for a small piece. I eventually but a small jar of Garlic Paste which I ate it with two pieces of bread which I bought later on from a supermarket.

That was all I tried but there are much more to it. There were lines in a few of the restaurants and of course the most popular drink of Bavaria, it's Beer hasn't been tasted yet.
(Photo: A good crowed seemed to be enjoying themselves in the market area)
Shopping Travel