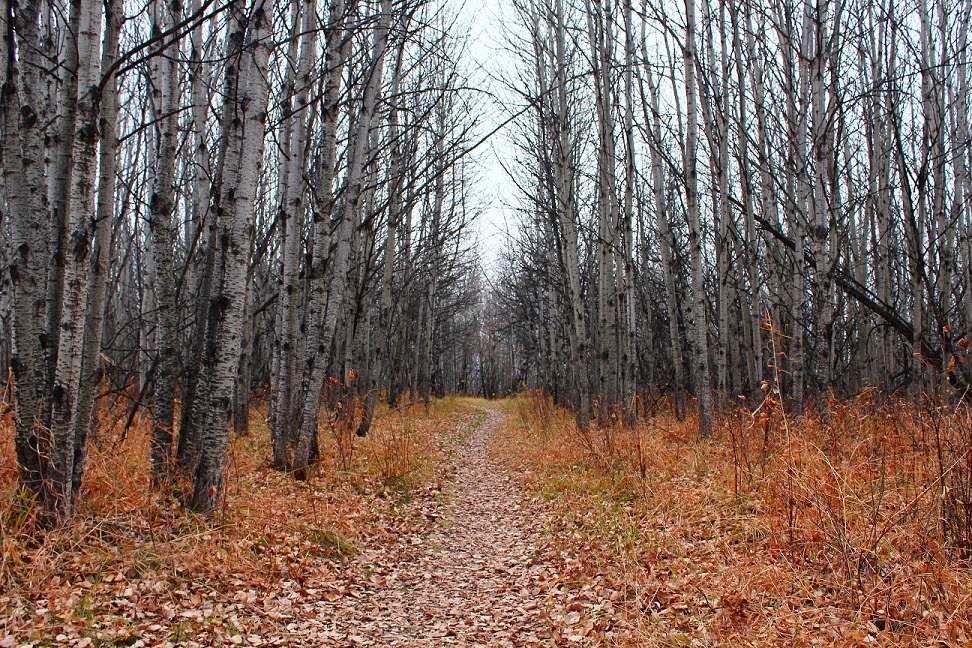 I went to Weaselhead Park for the second consecutive day! It might sound stupid but the second time was for two reasons:

1- I could get enough exercise for my Fitbit monitor.
2- I could take a few photos.

Both of them took place but it was not as exciting as yesterday. My yesterday's plan was to go to Glenmore Park and walk for 1 hour and then 1 hour back. Over there when I was simply walking Elbow River Pathway I realized Weaselhead Park as an extension to Glenmore Park, its south part. I went until the I reached a pond and a bridge beside it. My guess was as Google Maps shows the park or Natural Area extends further to west so I decided to go again today. For that reason I started earlier compare to yesterday, garbed my camera and put warmer cloths on. I had reached the pond in about 01:04 hour but this time I don't know if it was tiredness or boredom that caused me to reach there in 01:20 hour! I then realized that the pathway turns and becomes maybe a loop around the pond. I had seen animals swimming in pond which they looked like Beaver to me especially because I saw their home but today when I paid more attention they looked to be Water Rats! They looked that way because when they were diving and their bottom was exposed I saw a long, narrow tail, instead of a short and wide one! It was a disgusting feeling because I hate rat and mouse.
So I didn't follow the loop and took a gravel rood when was going to west. I could hear the passing cars and even saw one or two before I reached another gravel road which was going north-south and that seemed to be the end of the park. This is actually what you see in Google Maps and the north-to-south road is called Weaselhead Road in the map or at least this is what I want to believe!
Anyways there is a kind of plant or business there when you cross the road which is called Sarcee Asphalt. That again is not seen in the map but it's expected because not all of the business are shown in Google Map. I headed back to the parking lot after I learnt that there was any other road rather than the loop around the pond. It started snowing when I was half way to the car and got really bad when I reached the reservoir part of the pathway. There was barely anyone in the Park but I made it to the car by 18:40.
I could not feel my hand when I reached home and was trying to make myself a sandwich. I had an Avocado cut and I wanted to peel it but I was not able to grab the skin with my fingers! Right now I'm very tired and have to brush my teeth and maybe even take a hot shower and go to bed. Weaselhead Park is an extension to Elbow River Pathway of Glenmore Park with a few benches to sit and garbage cans! I didn't see anything else. Maybe if I take the loop there are more to the park. The other thing about the park is it used to be a training center for Canadian Armed Forces (CAF) and there are a few signed which warn people about Unexploded Explosive Ordinances. That could be an exiting part to find mortars or similar but also fatal!
(Photo, top: You may see a scene such as this anywhere in Canada but I took it during my today's walk!)
Exercise