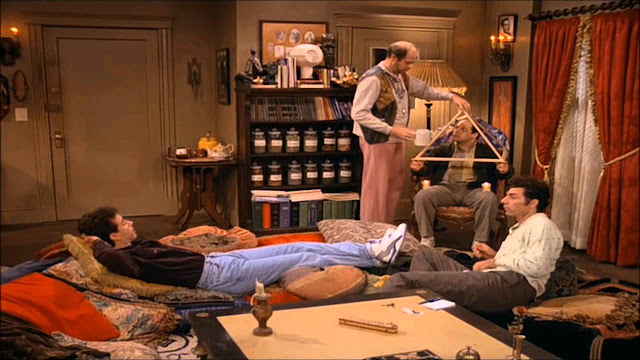 I went to one of the major medical centers in Calgary last week when I took The Chef for his heart procedure and immediately after arriving at the neighbourhood, what I saw reminded me of the an episode of Seinfeld called The Heart Attack. It was not because we were there as a result of The Chef's recent heart attack. It was because of the point made in the episode and I certainly believe it.
They are building a multi-story, concrete huge building there and have already called it Calgary Cancer Center!
But how is this building a reminder of that episode? In the episode, George, Jerry and Kramer are meeting a Kramer's friend who claims to be a holistic healer. The healer is portrayed by Stephen Tobolowsky who by the way is one of the most fantastic characters in the sitcom. Just to add he also had a scene in Basic Instinct and although he has a completely different role there, he was as fantastic in there. During the conversation he goes: To the medical system, you are not a patient. You are a customer. It is in benefit of the system that you remain sick!
It absolutely correct. If people stopped eating this much crap that they consume on daily basis the majority of health clinics, hospitals, pharmacies, pharmaceutical companies and similar businesses would close within a few months! It for sure is not for the benefits of thousands who works in the
Business and of course the government who has a good revenue! One thing that surprised me during my visit was the way some so-called medical professionals acted during our visit. While there's no doubt that there were all very helpful, nice, polite and supportive, at lunch a nurse, who was actually a Registered Nurse and I know it's not easy to become one asked what The Chef wanted for his lunch. The options were limited but OK. We knew we were not in a 5 star restaurant. The food was actually good but not for a person who recently had heart attack and high blood sugar! They knew that and she brought him a Turkey Sandwich, a Muffin and a big Banana! I don't think any of those were good for someone who had two major arteries of his heart blocked(!) and his blood sugar, in the morning, was 15(!) but I could be wrong. After all she was a Registered Nurse!
The Chef still is on sick leave and has to make his mind about the type of cure he is interested in. He called me the other day and said that he had decided to go with Open Heart Surgery, despite the fears he has. I guess the Cardiac Surgeon & Intensivist (as his business card suggests) and his team would be very happy when they here that! As well of all the other individuals who are in this profitable business!
(Photo, top: Scene from Seinfeld. George under the pyramid(!) is offered a special tea for his tonsil problem! Kramer and Jerry are both relaxing!)
Food Western Culture