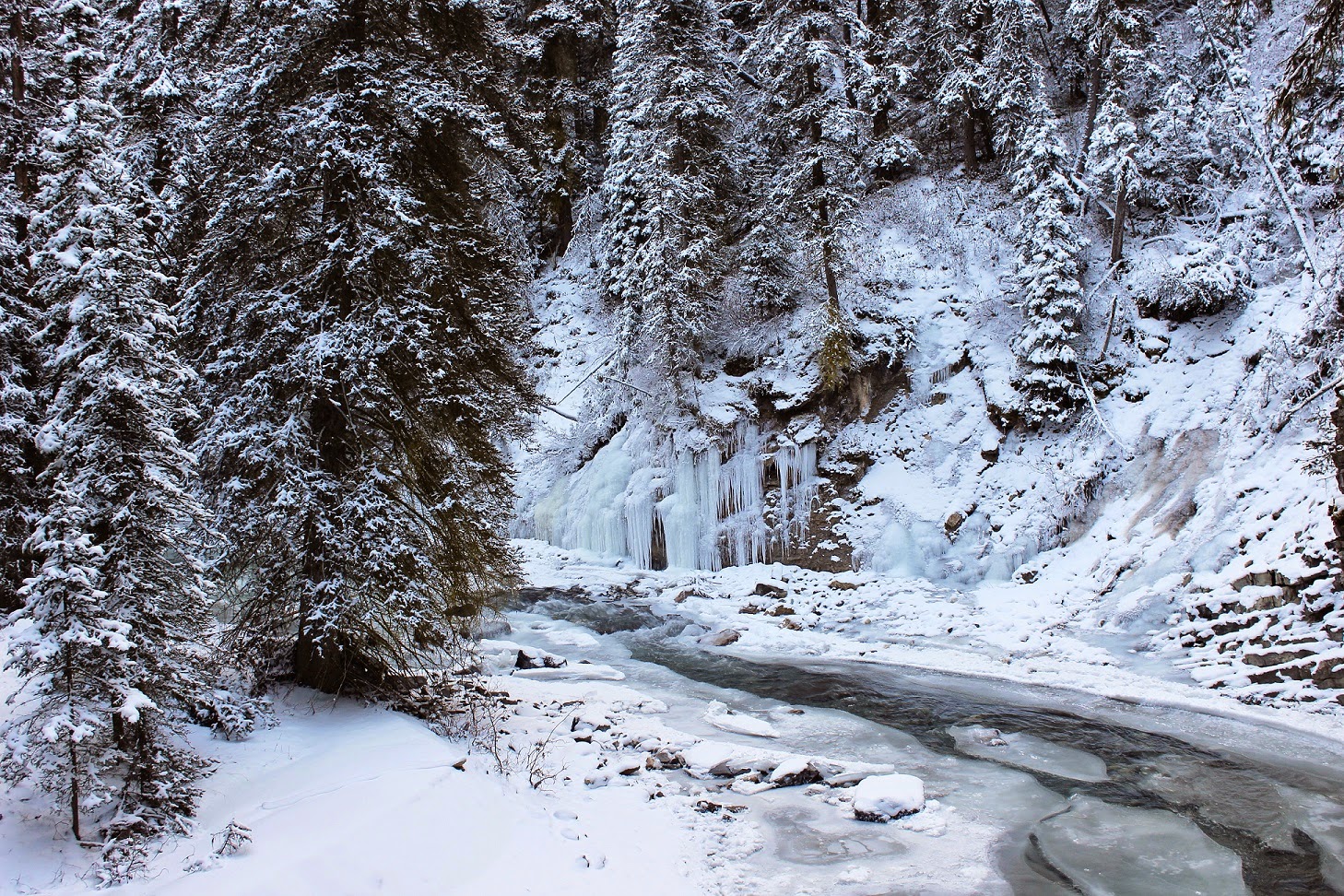 It has been exactly 1 month since I had a hike today. Unlike my hike to Kehlsteinhaus as as it is said in English-language countries Eagle's Nest, although that is not its literal meaning, hike to Johnston Canyon near town of Banff felt like my morning walk to work, in another word a child's play! I truly have no idea why in the hell Johnston Canyon has been given this much credit! My guess is the trail is a perfect hike for kids age 4-10, seniors 67+ and of course the wimp, puss and not to forget the pretentious!
So in order to give the hike a little meaning I woke up at this morning, grabbed my gear and walked to the car. Ignited the engine and did a little scrapping to have it ready for a ride. I wanted to purchase gasoline. Therefore I checked the gas stations on my way to Highway No. 1 and saw a few of them showing ¢99.9 per liter which is the result of new drop of crude. Happily I drove to the last Shell gas station in the town where I saw ¢107.9! I grabbed a Latte from the nearby McDonald's, purchased the gasoline and headed west. The road was OK both in terms of traffic and ice & snow but  is at least hour drive from the city and for me who most of the time drives within the limits, it usually takes even longer.
There was not a single car in the parking lot when I pulled in. I had a pullover and two layers over that but they for sure didn't help much with the extreme cold of -24 degrees C! I had my earmuffs, a monkey hat,a sort of fur hat and my pair of gloves all on but they were not very helpful. The most affected parts were my soles. I tried to walk fast so I could beat the cold and it helped. The stream was frozen on the upper layer and the area looked nice. There was only a few minutes to the first fall which is called Lower Falls and then a few more gets you to the . I could go higher to get to the so called Ink Pots and see them and the  from the top but there was not that much of motivation in me. I took a few photos and headed back. The entire walk didn't take more than hours including all the stops for reading the information boards and taking photographs. I realized shortly after I started that the big camera's battery was near dying! The small camera didn't even turn on! It had lost all of its energy from the night I had gone gone to !
There was no one at the parking lot again when I went back. I guess this arctic cold had most of the hikers at home. I might make another trip[ to this location in a summer morning and of course very early before kids and seniors finish their serial and get out, just to see the area unfrozen(!) and go up the Ink Pots and maybe even further.  could be considered only a photography opportunity or a warm up for a real hike/scramble in the region. If you intend just to see  and you are stationed in , it would be a mistake unless you combine it with another program such as a lunch in the area around (, Canmore, etc.) or a picnic in the area itself. Driving for almost hours back and forth just to see the canyon does not seem to be a good idea.
For me it became satisfactory as I tested myself in an extremely cold condition. Apart from that I had three photography opportunities with wildlife that I used them. Otherwise it would be very disappointing trip!
(Photo, top: Even the extreme cold didn't stop the stream from running but the question is how cold the water should be to prevent it from moving completely or is that even possible? Icicle are seen at the sides)
Animals Exercise