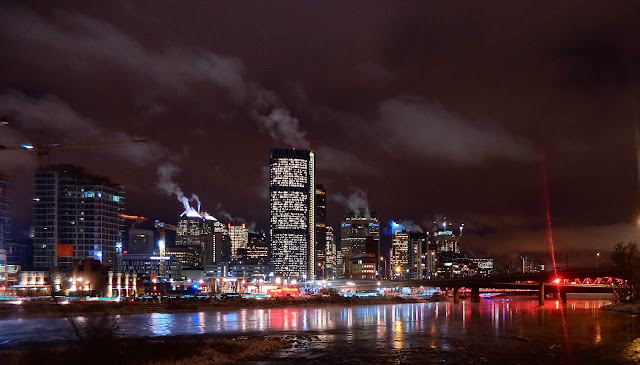 Today was a little bit better than yesterday so I promised myself to go for running. I washed the cloths after work and while the exercise room was available I felt that I could not stay inside so I put my cloths on and went out but this time I went to the east side of the Downtown when they are going to have the luxury East Village. The temperature was around -14° C and wind was blowing off and on. I soon realized that I would not be able to run! Therefore I just decided to walk around and see what has happened in the east side of the Downtown. I was hoping not to see Vancouver's Downtown East Side although the rehabilitation is right there. There were barely anybody out but I saw two runners and one homeless who was wandering around. The pathway and all the surrounding is impressive. They have reconstructed the St. Patrick's Bridge and are in the process of building high-rises in that part of the town, I believe.
I intended two spend more time out but the cold was unbearable. I took my right hand's glove off a few times to be able to operate the camera but it was brutal!
All the luxury is good and I think they will be expensive residence but what will they be doing with the rehabilitation center?! I don't think anyone wants to look out the window in a nice June day of Calgary and see a homeless guy with shabby cloths pissing in front of the main entrance! I have nothing against homeless people but I personally wouldn't like to see a shopping cart full of cans and bottles on my sidewalk every day or people offering each other grass cigarette or someone laying down in his blood with a knife in his back, scenes are very normal around that neighbourhood.
I'm getting off the subject a bit and I will have to have a separate post about homelessness and who these people are but what's important here now is to keep up the exercise at least to an acceptable level in this weather.
(Photo: This is taken from the newly reconstructed St. Patrick's Bridge looking to the west at Bow River and Downtown Calgary. The Bow is the tallest high rise almost at the center)
Exercise Weather